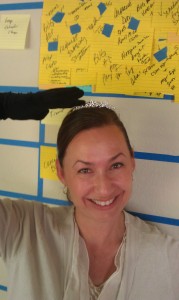 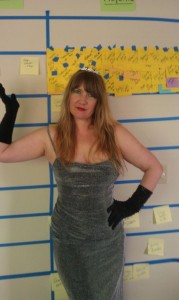 We here at Agile Learning Labs are determined to make the world a more funner place for our clients and for ourselves, in accordance with our operating values. So we kicked off a brand new tradition in the lab today: Formal Fridays. Of course, there were only two of us here today, so for now, you will have to make do with feasting your eyes on La Gonzalez and Miss Hillary, although rest assured, there will be plenty of whiskered gentlemen in top hats and tailcoats appearing in future editions (you know who you are, boys!). If you feel like joining us, just tweet your #formalfriday pics! 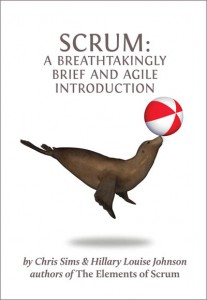 We published this little book very quietly last week, and without so much as a tweet it has already become the #2 bestselling kindle book on software project management, right behind our other book, The Elements of Scrum. The response to Elements has been tremendous over the past year, and a lot of people have singled it out as a refreshingly brief and readable way to get the goods on Scrum. But at 180 pages, you could say it’s only relatively brief.

What if you are sending a team off to scrum training next week and want to give them a taste to fire them up? Or let’s say you are a scrum evangelist at your company and can only count on 15 minutes of your CEO’s attention to spark her interest? Or maybe you’re a scrum master and you just want your husband to learn enough about what you do that he doesn’t glaze over at the dinner table….

In those cases, you’ll need something not just refreshingly brief, but breathtakingly brief. Which is why we took some of the most salient material from The Elements of Scrum and retooled and repuropsed it into a pocket-sized, highly consumable little volume that is cute enough to send to your granny as a birthday card, but smart and sophisticated enough to slip to your CEO or HR director. Meet Scrum: A Breathtakingly Brief and Agile Introduction by Chris Sims & Hillary Louise Johnson. You can buy it on Amazon in paperback for $9.95, or get the Kindle version this very minute for a mere 99 cents.

Late last year, Agile Learning Labs began incubating a new venture, Dymaxicon, to explore the publishing space for agile-themed books, and beyond. This Saturday, August 20th, we’ll be celebrating the success of our first two titles, The Elements of Scrum by Chris Sims and Hillary Louise Johnson, and The Bad Mother, a novel by Nancy Rommelmann. We’ll also be introducing a rash of new titles. 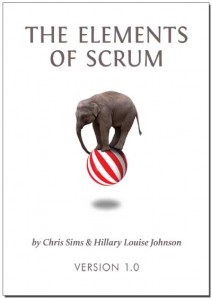 For an introduction to what agile publishing is all about, check out what the Huffington Post has to say about us. As you may or may not know, few business models are as top-down and old-school as traditional publishing. It’s also, as you may have noticed, an industry in gross, spectacular decline of late (Rupert Murdoch, anyone?). So this seemed like a great space in which to start rolling out agile methods, especially as one of our founding team members, Hillary Johnson, hails from that world, having been at various times a novelist, magazine writer and newspaper editor.

Dymaxicon is in the midst of launching a whole new spate of titles, including a video series and several new fiction titles. Many of our authors will be present on Saturday to sign books and answer questions, so come join us for wine, food and cutting-edge literature. More details on the evening’s line-up after the jump.

We are very proud that The Elements of Scrum by Chris Sims and Hillary Louise Johnson is now in the two coolest technical bookstores in the world: Ada’s Technical Books in Seattle, and Powell’s Technical Books in Portland. If you are geeking in the Northwest, check it out.

These “Aha! Moments” were posted by participants at the recent Creative Edge series workshop “Coaching Agile Teams” with Lyssa Adkins in Foster City, California. Imagine the insights you yourself would have if you joined Lyssa’s next class on Dec 20 & 21 in Boulder, Colorado.

Consensus = convergence
Risk being wrong
Lego’s / bionic intensity value’s tree
Practice being non-judgmental
Anonymous team voting on team values and where we are
High value keeps going to high performing teams
Pair coaching – DATA – EMOTION
XP practices are so freakin’ obviously right so just do them!
The trunk of the tree is the operating mode (see Wisdom of Teams) – The “How” your team produces is the fruits
Use Shu Ha Ri in Retrospective
Agile coach’s job is to coach in all directions – up, lateral, etc.
Any change makes it a different team
Intensity question: How fast are we recovering from adversity?
Experiential games for greater “being” can be more deeply formalized
We don’t buy into plans that we didn’t have a part of creating
Sometimes when coaching it’s ok to blurt out my intuition – as long as it helps the them deepen their understanding
Wall of Wonder – WOW!
Model supportability to encourage team members to ask for help and voice impediments
We need better online games for Agile teams
Value relationships – make the person more important than the task!
Reach out to team members at the leading edge of Shu-Ha-Ri to lead the team forward
Level two listening demands eye contact
Circle game: About reaching out for help & not knowing when you will be asked for help
Gardening metaphor intensity for discussing team values
Collaboration not competition
Pain snake
An acknowledgement is different from than an appreciation. Example: what I’m noticing about you is…
My “flip” moment was understanding VELOCITY. I will remember this!

Agile Learning Labs is partnering with Tobias Mayer to put on a brand new series of workshops aimed at trainers, coaches and advanced practitioners of Agile. We’re calling it Creative Edge: Training & Coaching for Coaches & Trainers. Catchy, eh? The Scrum Alliance is generously sponsoring the series, so there will naturally be special pricing for members.

So far Tobias has assembled a diverse and stimulating lineup:

These courses will be offered repeatedly, in San Francisco, Philadelphia, Chicago, Boulder, and Seattle. The first date is October 28-29, so visit the Creative Edge homepage with alacrity. There you can find out which class that will be, and sign up to be notified when venues are finalized and registration opens. We will be offering highly favorable pricing, and if you’re a member of the Scrum Alliance, the discounting will be absolutely crazy, so hie thee hence!