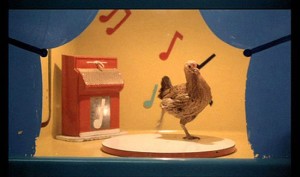 One of Herzog\’s early stars

One of the blessings of having a diverse (some might say schizophrenic) background is that I have friends like Anne Thompson, who has worked for Premiere and Variety and now has her own influential blog, Thompson on Hollywood. Today I read a post there by Sophia Savage about the filmmaker Werner Herzog, discussing some remarks he made as keynote at the Film Independent Forum, including this passage, which I think maps directly onto dilemmas in any kind of agile project environment, including software development using scrum:

By continually questioning the expenditure of a film (i.e. meeting daily with the line producer), [Herzog] cut $2.6 million off the Bad Lieutenant budget and finished two days early. Understanding that your film becomes immediately more profitable when you keep production costs as low as possible, is how you come to be taken seriously by producers and colleagues, he says. “That’s how you can survive in the long run, you have to take [what’s going on with the money] seriously.” Putting more money than necessary into a film is “nonsense.”

What Herzog articulates is that not only is it nonsense to spend more than necessary on a project, but that over-spending is actually bad for the project, in that it is on some level merely a symptom of poor communication. All those conversations he describes, those are opportunities to dig deeper into the actual value you are creating, for yourself, your audience (be they viewers or users), and your stakeholders. As in agile development projects, the financial savings and shorter schedule are actually the side effects of running a better, tighter project that stays on point through constant communication.

At the risk of dating myself, I grew up on art house screenings of Fizcarraldo and Aguirre the Wrath of God, but my favorite will always be Strozek (1977), which prompted Roger Ebert to write: “Who else would end the movie with a policeman radioing, ‘We’ve got a truck on fire, can’t find the switch to turn the ski lift off, and can’t stop the dancing chicken. Send an electrician.'”