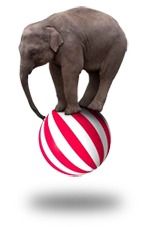 In the eighties I was an aspiring rock star, playing bass in a series of Chicago area bands. Without intending it, I often found myself the leader. I scheduled rehearsals, found gigs, booked the sound and light crews, did promotion, and mediated conflicts. My bands enjoyed ever-greater success and eventually I gave up my job as an auto mechanic to pursue music full-time. While leading a band was a lot like herding cats, I loved facilitating the creative process.

Eventually, I realized that superstardom wasn’t in my future and sold my music gear to fund a college education. I graduated from the University of Illinois in 1998 with a degree in computer science and mathematics. It was the height of the technology boom and Silicon Valley was at the epicenter; I didn’t bother looking anywhere else. Turning down offers from IBM, Marimba, and others, I became a software engineer at FactSet, a small financial software company. For several years I lived and breathed C++, building software for Wall Street.

The first team that I led created an application for the investment banking industry. During this project I introduced agile development methods, creating a process that borrowed heavily from Extreme Programming. To ensure that the product would meet the high standards of the investment banks, I introduced automated unit and regression tests, manual white-box and black-box testing, as well as a structured alpha and beta release process. The result was a string of releases that delivered valuable functionality to the market, on-time, and with high quality. Just as exciting was the way the agile processes helped the team become high performing, and happy! The product was adopted by most of the major investment banks and today generates tens of millions of dollars a year.

While I had learned much at FactSet, it was time for new adventures. I spent the better part of a year traveling, including some time in Europe and India. During my travels I started to think about what I wanted to do next. What I found was that I was most passionate about sharing the insights and lessons I had learned through years of guiding agile development teams. This also turned out to be what my clients most wanted. Agile Learning Labs was born!